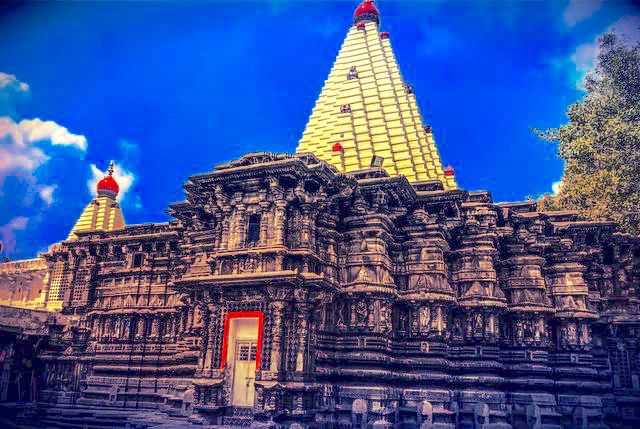 Mahalakshmi Temple, Kolhapur- All You Need To Know Before Visiting!

An abode of strength and peace, The Mahalakshmi Temple is located on the banks of river Panchganga in Kolhapur, Maharashtra. It is also called as Shri Ambabai temple and belongs to the Chalukya temple architecturally. The Murti of the crowned Goddess is mounted on a stone platform and is made of gemstone. It weighs about 40 kilograms. The image of Mahalakshmi is 3 feet in height and is carved in black stone.

Legend says that goddess Ambabai arrived in Kolhapur to protect the locals from a demon called Kolasura. Kolasura was harassing them. The Goddess defeated the demon and his dying wish was the place to be named after him. Hence the city was named Kolhapur. Historical evidence and practices followed in the temple led the scholars to believe that Mahalakshmi Temple is a Shakta shrine. In fact it is one of the 51 /108 major  ShaktiPeethas that are important shrines dedicated to Goddess Parvati in the form of Shakti.

According to the Puranas, Maa Sati sacrificed herself after her father Daksha humiliated her husband Lord Shiva. This enraged Lord Shiva who opened his terrifying third eye and danced a fierce tandava across the earth with the body of his beloved Sati in his arms. The Gods were scared that Lord Shiva’s anger would cause devastation in the universe. Therefore they sought the assistance of Lord Vishnu who dispatched his powerful Sudarshan Chakra to cut Sati’s body into pieces.

Every spot on Earth that received a portion of Maa Sati’s body became a place of worship for devotees of the Goddess. Each of these spots is honoured as a Shakti Peetha by devotees of the Goddess who are also referred to as Shaktas. The Mahalakshmi Temple also has the distinction of being one of the 51 prominent Shakti Peethas in the Indian subcontinent. The temple marks the spot that was blessed with Maa Sati’s eyes.

“Kirnotsav” (the festival of Sun Rays) is celebrated in the Mahalakshmi Temple at Kolhapur, when the rays of the sun fall directly on the deity at the time of sunset. It is said that the Sun god pays his homage to Mahalakshmi Ambabai for three days in a year. This is on the occasion of “Ratha Saptami”.

It is not surprising that even the rays of a setting sun pay homage to Goddess Mahalakshmi Ambabai as the life of a human being revolves around illumination and prosperity. But it is the wonder of wise architects who built the temple of Mahalakshmi at Kolhapur that the rays of the setting Sun, bow at the feet of the Goddess through a window, for a while before vanishing. It is the architect’s excellence, which was done more than 1000 years ago, and can still be observed. This special event is celebrated by thousands of people as Kiranotsav. Every year during Navratri, on the fifth day of Lalitapanchami, a palkhi procession is taken from the Mahalakshmi Temple to Temblai mandir at Temblai hill.