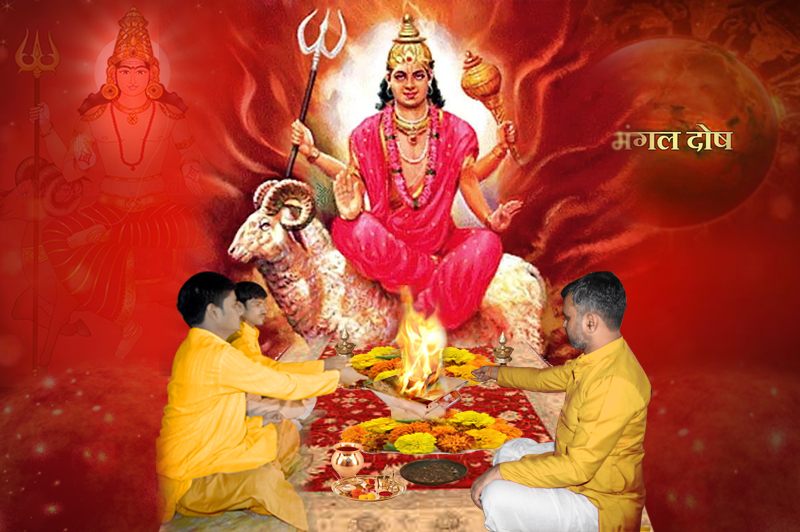 Mangal Dosh is connected with the planet Mars. If Mars is placed in the 1st,4th,7th,8th or 12th house in the girl’s horoscope it is called Mangal or Manglik Dosha. Manglik Dosh is known to have a very harmful impact on marriages since Mars is known to be the planet of war.

A person under the influence of Manglik Dosh may face a delay in her marriage. Also, the marital life remains extremely disturbed and there is constant disharmony, lack of understanding, trust issues and other differences amongst the two partners. Due to the girl’s manglik, both the partners face constant health related and financial issues. The girl may be extremely bad tempered and may face obstacles in tackling problems such as anxiety or depression. She also has the threat of becoming a widow.

Tuesdays are the most auspicious for performing the Manglik Dosh Nivaran Puja. A special puja is conducted by dressing the girl up in the traditional attire of a married woman to please Goddess Parvati and to represent the desire of the woman that she wants to be like Goddess Parvati for her entire life. Goddess Parvati showers her blessings of good health, prosperity, good fortune and a happy married life on that girl. Then a Mangala Gauri Puja is performed with full devotion during the Shravan month of Hindu calendar. The devotees must  eat only vegetarian food for the whole month of Shravan. Mangala Gauri Puja is extremely beneficial for removing the Mangal dosh from the birth chart of women.

DevDarshan facilitates online Daily Darshan, Pujas and digital donations for Devotees. Now, due to the present state of the pandemic, most of the temples have shifted to conducting online Manglik Dosh Nivaran Puja for the convenience of the devotees. However, it becomes a bit of a hassle to connect to the Mandir priests to get the puja conducted. Dev Darshan can come to your rescue at that moment. Dev Darshan is a platform which provides a smooth interaction between the temple houses and the devotees without much worry and hassle. It also conducts online Pujas such as online Manglik Dosh Nivaran Puja. So, check out the online services provided by Dev Darshan here and get your bookings done in one click.