Shri Khatu Shyam Ji Mandir is a Hindu temple located in the village of Khatushyamji, Rajasthan. It’s a very popular temple among pilgrims. It is believed that the temple houses the miraculously rediscovered head of Khatushyam or Babarika, a persona of Mahabharata.

The temple is rich with various architectural designs. Lime, marble, tiles and mortar have been used to build the temple structure. There are beautiful gold sheets which cover the shutters of gue sanctum sanctorum. The prayer hall outside is named Jagmohan. The hall is pretty large in size and the walls are distinctively painted depicting mythological scenes of Mahabharata. The entrance and exit gates of the temple are made up of marble and also feature ornamental floral designs. There is an open space in front of the temple entrance. There is a garden near the temple called “Shyam Bagicha” from where flowers are plucked to offer to the deity. The Samadhi of a great devotee named Aloo Singh is also located in the garden. There is also a holy pond near the temple called the “Shyam Kund” from where the ‘Sheesh” of baba came out. Devotees take bath in this kund and worship Khatu Naresh.

Legend says that before the beginning of the Mahabharata Barbarika’s last wish was to see the battle of Mahabharata. Therefore, Lord Krishna placed his head on the top of a mountain so that Barbarika could see the war. Many years after the beginning of Kali Yuga, the head was found buried in the Khatu village located in present day Rajasthan. The location was obscured until well after the Kali Yuga period began. After that, suddenly on an occasion, milk started flowing spontaneously out of a cow’s udder when she neared the burial spot. Astonished by this incident, the local villagers dug the place up and the buried head was found. The head was handed over to a Brahmin who worshipped it for many days, awaiting divine revelations to find out what was to be done next.

Roopsingh Chauhan, king of Khatu, then had a dream where he was inspired to build a temple and install the head therein. Subsequently, a temple was built and the idol was installed on the 11th day of the Shukla Paksha (bright half) of the month of Phalgun.

The temple timings are as follows:

The temple remains open 24 hours a day on every Shukla Paksha Ekadasi, i.e., on the 11th day of the bright half of every month in the Hindu calendar. The temple is also open throughout the 4-day Phalguna Mela. 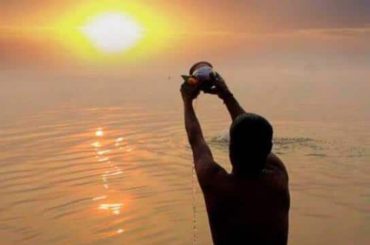