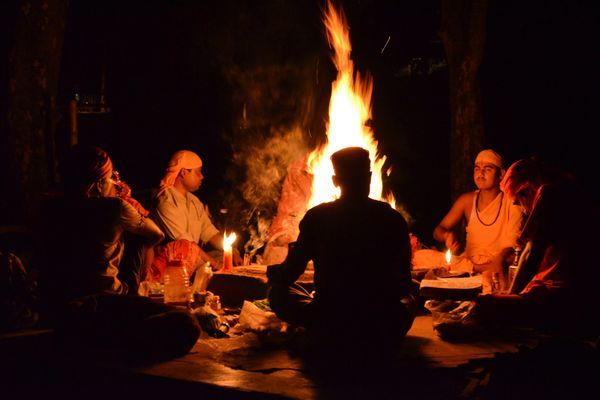 Sri Durga Malleswara Swamy Varla Devasthanam is a well-known Hindu temple located on the banks of river Krishna, Indrakeeladri, Vijayawada. It is mentioned in the Hindu scriptures that this holy shrine of Goddess Durga is a Swayambhu (self-manifested) and hence is very powerful. This temple is the second largest temple in Andhra Pradesh. It is believed that  Arjuna obtained the “Pasupatha astra” after his great penance for Lord Shiva in this land where the temple stands today. Then the temple was built for Goddess Durga by Arjuna. It is connected by steps and ghats to the main road. The temple occupies a significant place in the ancient scriptures since several of the Siva-leelas and Shakti-mahimas were enacted on or around it, making the region a place of unequaled spiritual significance and attracting pilgrims since times immemorial.

Legend says that Arjuna prayed to Lord Shiva on the top of Indrakila hill to win his blessings and the city derived its name as “Vijayawada” after Arjuna’s victory. Another famous mythology says that it’s about the triumph of goddess Kanakadurga over the demon King Mahishasura. It is believed that the growing threat of the demons became unbearable for the native citizens. When the goddess appeared the sage Indrakila begged her to reside on his head and keep a vigil on the wicked demons. As per his wishes of killing the demons, Goddess Durga made Indrakila her permanent abode. Later, she also killed the demon king Mahishasura giving the people of Vijayawada freedom from evil.

Dasara- This festival is also called Navratri and special pujas are performed during this ten-day festival. A large number of pilgrims visit the temple during this festival to enjoy the colorful celebrations and take a holy dip in the Krishna river. A symbolic representation of the 10 forms of the triumph of good over evil, known as ‘Alankaram’ is chosen as per the astrological star for each day, in accordance with the lunar calendar.

Sakambhari festival- The annual festival of the Goddess i.e the Shakambhari festival is celebrated in the “Ashadha” month with a lot of rituals and ceremonies. During this three-day-long festival, goddess Kanaka Durga assumes the form of Banashankari Amma or Shakambari of the Banashankari Amma Temple and then prayers are offered to the Goddess to bless us with plenty of all food items such as fruits and vegetables so that no one on this planet earth starves or sleeps hungry. Shakambari festival is celebrated from Sukla Paksha Thrayodashi to Purnima, of Ashadha month every year.