Holi, the festival of colors, is one such festival celebrated by millions of people all over the country. Holi is also considered as a festival of fun, frolic and vigour in India. People celebrate Holi by smearing each other’s faces with colors, splashing coloured water on each other and eating various types of delicious sweets. Holika Dahan is celebrated on the full moon day in the month of Falgun, the last month of the Hindu calendar and the next day is Holi. Holi 2022 falls in the month of March as per the Gregorian calendar. There are a variety of religious traditions that are associated with Holi.

Let’s get to know when is Holi 2022 and what is the auspicious time for Holika Dahan.

Holika Dahan is much more than just a festival for Hindus, it symbolizes the victory of good over evil. According to the Indian calendar, the full moon day of the Shukla Paksha of the month of Falgun will begin on March 17 in the late afternoon. Hence, Holika Dahan can be observed on Thursday, March 17, 2022, in the evening during the Pradosh Kaal. The best time for Holika Dahan during Holi 2022 is from 9.10 pm to 10.15 pm. After this period, Holika Dahan is prohibited due to Bhadrakaal in the night. 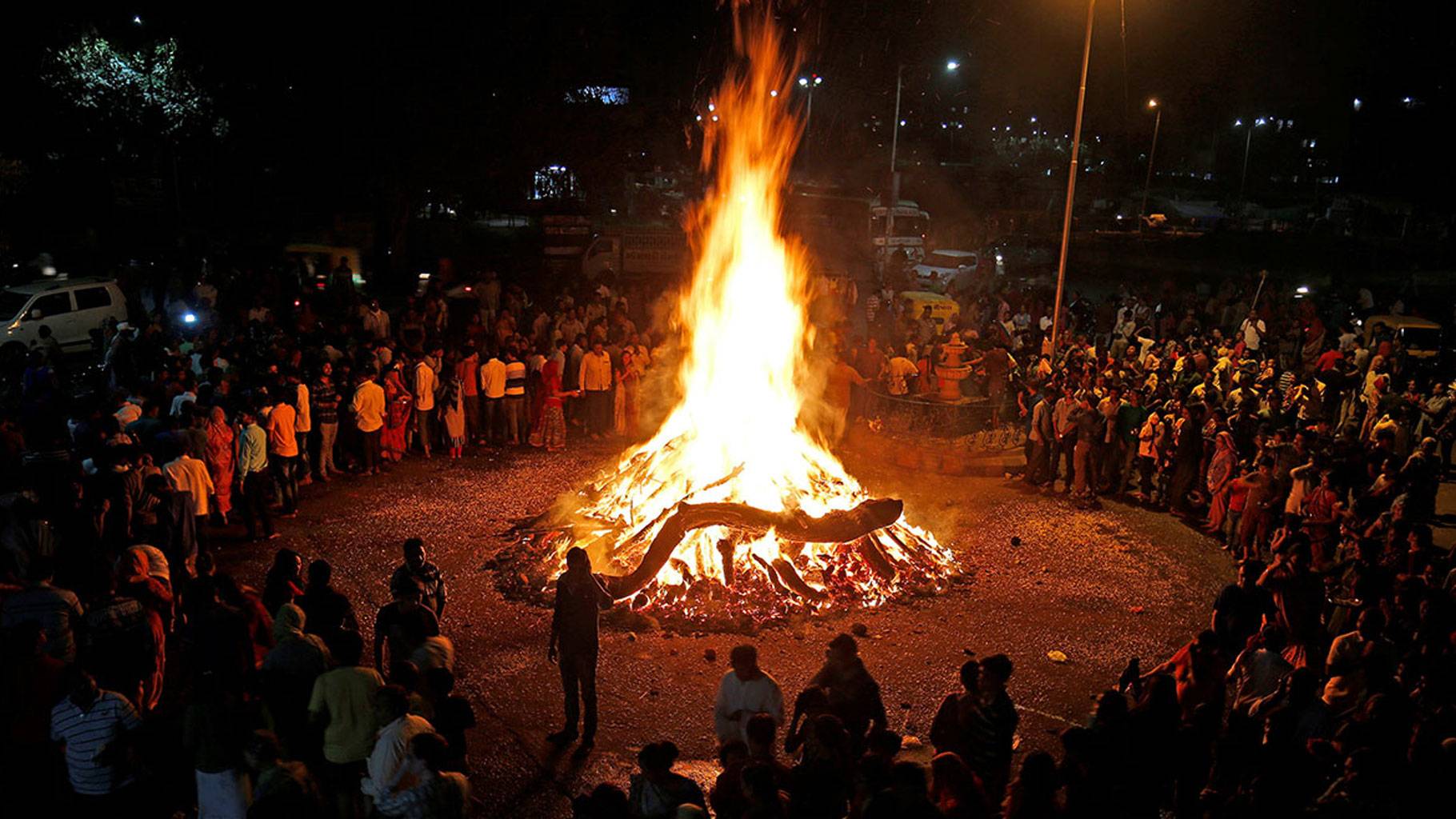 A dry branch of a tree is used to prepare the Bonfire for Holika Dahan. The branch is worshipped before the Bonfire ritual happens. People decorate the place of the bonfire with rangolis and flowers. The devotees first worship Holika before the Holika Dahan ritual in the evening. Then various Mantras are chanted and the Bonfire is lit. Coconut, fresh crops, gulal, turmeric, jaggery, moong dal etc are put in the bonfire.

The devotees circumambulate around the Holika Dahan five times, put small wooden sticks in the fire and pray for their family’s happiness and prosperity. It is said that all the evil vices of human beings such as pride, anger, greed, lust, etc are burnt in the Holika Dahan helping the devotees to have a new beginning. In many places, there’s also a tradition of bringing Holika’s ashes home and performing a victorious tilak from it. In some places, people also perform a Parikrama and offer water to the holy fire as a part of the ritual.

There are many stories related to Holika Dahan in the Puranas, but the most famous story is that of Bhakta Prahlad and his aunt Holika. Prahlad was a devotee of Lord Vishnu since was born in the house of Narada due to which he was inspired to devote his life praying to Lord Vishnu from his very childhood. Prahlad’s father, the demon king Hiranyakashipu did approve of this act of Prahalad. Therefore, Hiranyakashipu made various efforts to kill Prahalad, but failed.

Finally, he pleaded with his sister, Holika, to enter into the fire with Prahalad in her lap. Hiranyakashyap knew that Holika had a boon due to which no fire could burn her. Therefore, Holika coaxed Prahalad into her lap treacherously and entered the blazing fire. To everyone’s shock and surprise, Prahalad came out safe but Holika was burnt into ashes in the fire. As per legends, Holika paid for her sinister desires or motives in life. Even today the devotees enact the scene of Holika burning into ashes in many parts of India.

Some Interesting Facts about Holi 2022

On the day of Holika Dahan, burning the garbage taken out of the house in the evening in Holika (bonfire) removes the evil eyes on the house.
By offering coconut in the burning fire of Holika, great progress is seen in business and jobs.
After the Holika Dahan, bringing the left out ashes to home and sprinkling it in all corners helps to remove negative energies.
On Holi 2022, the devotees should also put betel leaf and betel nut into the Holika for a happy and successful life.
Farmers also apply Holi colors to the new crops to get the blessings of the Lord, wishing that the harvest season happens smoothly.
Chanting the Satyanarayan katha on the auspicious day of Holika Dahan helps the devotees to get rid of debts.
Worshipping Lord Shiva during Pradosh Kaal and offering Gomti Chakra on Shivling at the time of Holika Dahan before playing colors gives special benefits in business.

There are some specific colors that can prove to be auspicious and beneficial to people of different zodiac signs. Here’s a list of some zodiac signs and the colors they should play with during Holi:

When is Chhath Puja 2022? Its Importance, Worship Method and Benefits of Offering Arghya to the Sun God